The world’s fastest man says he’s not scared of zika disease since he can always outrun virus-carrying mosquitoes.

Jamaican sprinter Usain Bolt, who is preparing for this summer’s Olympic games, was asked recently about the zika epidemic in the host country of Brazil. No worries, he said.

This should be obvious: We are not saying that running is a zika prevention method. (Here are some actual steps to take to avoid being bitten.)

But we were curious whether Bolt really would outpace the mosquito. (People already have tried to figure out if Bolt can beat a cheetah. He can’t.)

To the stat sheet! 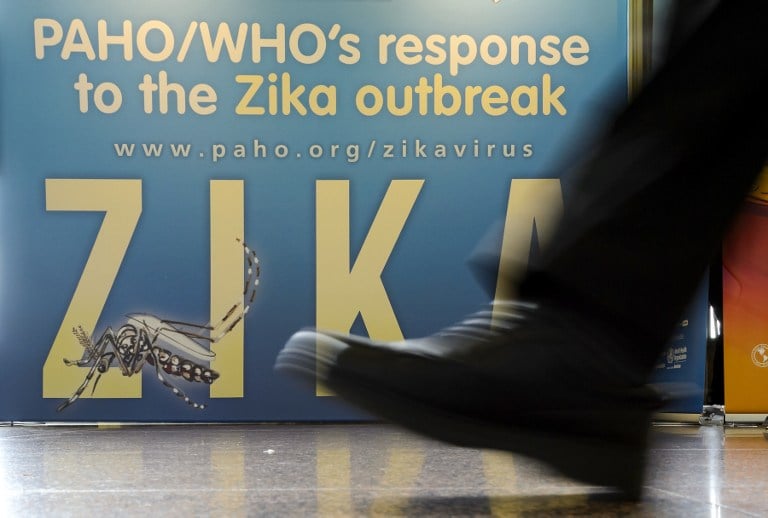 A banner on zika virus outbreak at the opening of the World Health Assembly in Geneva in May 2016.
Photo: AFP/FABRICE COFFRINI" />

So Bolt runs — in short bursts — around 35 kilometres per hour.

How does that stack up against mosquitoes?

Many mosquito species in the Aedes genus (africanus, apicoargenteus, luteocephalus, vitattus, furcifer, albopictus, hensilli and polynesiensis) can transmit the zika virus, but the main vector is Aedes aegypti.

Female aegypti mosquitoes (the ones that bite) are estimated to have a cruising speed of 0.5 to 1.5 meters per second.

That’s the equivalent of 1.8 to 5.4 kilometres per hour — a fraction of Bolt’s speed, even at his slowest.

In that sense, it’s not a contest.

Until you factor in stamina. Bolt runs short distances, while the mosquitoes are in it for the long haul. Researchers have documented lady aegypti flying continuously for two to nine hours, with an average of 2.2 hours. So Bolt, or really anyone, would have to run nearly 12 kilometres in that time frame to outpace the mosquito.

Kenya’s Dennis Kimetto, Bolt’s world record counterpart in the marathon world, ran 42.2 kilometres in 2 hours, 2 minutes and 57 seconds. He’d leave the mosquito more than 30 kilometres behind with that pace.

Bolt and Kimetto would have a lot more to worry about if the zika vector was a desert locust or earworm, which have respective average air speeds of 33 and 28 kilometres per hour. But for now, zika-carrying mosquitoes can’t catch up to either man.


Conclusion: No contest over short distance, but stamina counts

Female A. aegypti mosquitoes, the main vector for zika, cruise between 1.8 to 5.4 kilometres per hour. That’s a lot slower than Bolt, though the mosquitoes fly for much longer than Bolt sprints.

Politifact rated the claim “mostly true”. See how it appeared there.