Did a Christian prophet challenge lions to a fight in the Kruger National Park?

Media reports claimed that a man challenged lions in the Kruger National Park to a fight , did this incident really happen?

“ZCC prophet challenges lions to a fight at Kruger National Park to prove God’s power & almost DIES,” the headline of a story on a website called the Daily Post read.

In the days after that numerous online platforms such as The Southern Daily, Imzansi and the Zimbabwe Nation republished it. It was also shared on social media, such as Rhino Alert’s Facebook page.

According to the report, a Pastor Alec Ndiwane from the Zion Christian Church (ZCC) in Soshanguve outside of Pretoria was with church members in the Kruger National Park when they came across a lion pride feeding on an impala.

“It is believed the prophet went into a trance”, the story reads, before he “opened the car door and went charging towards the lions. Alec must have then come to his senses as he quickly realised this was not going to end well and made an immediate turn and ran back to safety”.

Some of the reports included a picture of a man kneeling with his head on the ground with two lions jumping at him.

Is this proof that the incident really happened?

‘No such incident reported to Kruger National Park’

Africa Check tried to verify the attack with the ZCC. A priest we spoke to at its head office said the church does not talk to the media and suggested Africa Check visit its headquarters at Moria in the Limpopo province to put in a formal request for comment. The number listed for the church in Pretoria just rang and rang.

Kruger National Park spokesman William Mabasa told Africa Check that they were aware of the story making rounds. According to it “a game ranger who was nearby fired some shots with his gun to scare the lion away”, leaving Alec with a serious injury to his left buttock.

But Mabasa said no such incident was reported to the Kruger National Park and called the article a hoax.

“The Kruger National Park is not aware of any such incident taking place anywhere in the park. It would have been reported to us if any of our rangers had taken part in this incident as reported,” he said. 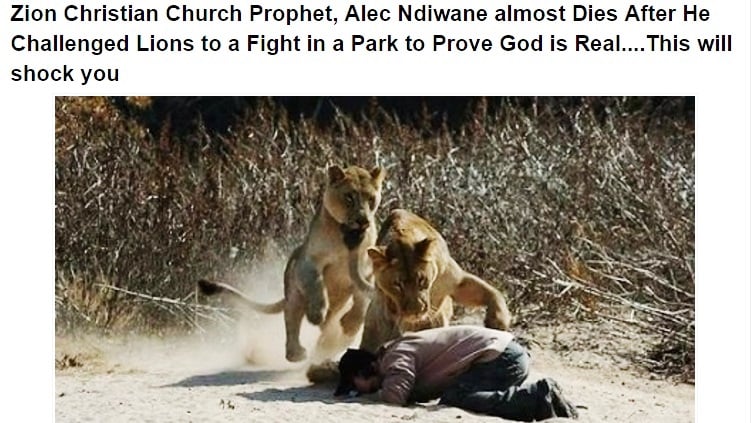 The picture is definitely a hoax. Africa Check used reverse image searching to establish that the man in the photo was South African “lion whisperer” Kevin Richardson.

Kevin’s wife Mandy confirmed to Africa Check that it was her husband kneeling in front of lions in the picture.

“He is a Christian but not part of the ZCC church group,” she said.

Mandy told Africa Check that the picture was taken on a farm in the Broederstroom area of South Africa and the two cats were sisters, Meg and Amy, that Kevin has worked with since they were cubs.

“The relationship you see there is from years of working with the lionesses enabling him to trust them to run and jump and play with him. It was not by any means an attack.”

“He would not do this with animals he doesn't know and especially not wild animals as that would be dangerous and irresponsible,” she added.

Conclusion: No evidence of attack but pic a hoax

Africa Check couldn’t find any evidence showing that a ZCC prophet was injured by lions when he charged at them in the Kruger National Park. According to the park authorities, no such incident was reported to them.

However, the picture used to illustrate the story is most definitely false. It was confirmed to Africa Check that the man in question is South African Kevin Richardson, who refers to himself as a lion whisperer.

GUIDE: How to spot fakes and hoaxes online