South Africa holds municipal elections on 1 November 2021. The Economic Freedom Fighters have made a significant mark on national politics but still do not govern any of the country’s municipalities. We examined what they’ve promised if they win control. We will also look at the DA and ANC’s claims and promises.

In the upcoming municipal elections South African citizens will elect representatives for district, metropolitan and local municipal councils across the country’s nine provinces.

The Economic Freedom Fighters (EFF) is a political party formed in 2013. The EFF does not govern any of South Africa’s 278 municipalities. However, it did win seats in municipalities in the 2016 local government elections.

The EFF’s election manifesto is titled “Land and jobs manje!” It includes promises of what the party would do if it won a municipality. Manje means “now” in isiZulu.

In this report we check if the party would be able to implement their promises based on the country’s current laws. We contacted the EFF for more information on their plans but at the time of publishing had not received a response.

Verdict: Possible if municipalities have the money and required skilled workers.

A tender is a formal invitation put out by national, provincial and local government to procure goods and services from private suppliers. Tenders are made open and public for service providers to provide their pricing. 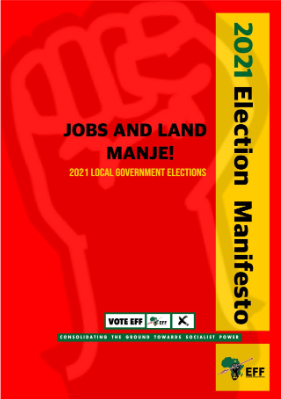 Section 217 of South Africa’s constitution states that if an organ of the state in the national, provincial or local sphere of government contracts for goods or services “it must do so in accordance with a system which is fair, equitable, transparent, competitive and cost-effective”.

Each municipality must have a supply chain management policy on its website that sets out its standards for procurements.

Dr Andrew Siddle is an adjunct professor of corporate governance in the College of Accounting at the University of Cape Town (UCT). He told Africa Check that while it was legally permissible for municipalities to employ workers full time, many might struggle to find local qualified workers and find it unaffordable.

He added that although there had been instances of tenders being abused, the purpose of the tender process was for government sectors to obtain goods and services at the cheapest prices.

Promise: “EFF municipalities will make it illegal for residents to be evicted from private properties unless a suitable alternative is found for them.”

Verdict: It is already a constitutional requirement for municipalities to provide temporary alternative accommodation for evictees.

Municipalities are allowed to pass by-laws but they may not conflict with national or provincial legislation.

The Prevention of Illegal Eviction from and Unlawful Occupation of Land Act (1998) outlines the procedures that must be followed for the eviction of unlawful occupiers. The act says an eviction order must be obtained through the court which will consider whether the eviction is “just and equitable”. The court will look at factors such as the rights and needs of the unlawful occupiers and how long they have occupied the land.

Lauren Royston is the director of research and advocacy at the Socio-Economic Rights Institute (Seri), a non-profit based in Johannesburg that provides legal assistance to protect and advance socio-economic rights.

Royston told Africa Check that the law and case law required the state to provide temporary alternative accommodation to evictees if their eviction would make them homeless.

“Municipalities are legally obliged to provide temporary alternative accommodation if the eviction leads to homelessness, no matter who runs them,” she explained. “That’s a constitutional requirement.”

The constitutional court judgement in the City of Johannesburg v Blue Moonlight Properties case found that municipalities were obligated to provide alternative housing, even in cases where people were being evicted by private landowners.

Promise: “Every EFF municipality will do away with apartheid spatial planning and expropriate land without compensation closer to inner city centres to build sustainable housing for all.”

Verdict: Municipalities can expropriate land but current law states expropriation must be done with “just and equitable'' compensation.

Section 9.3 of South Africa’s Housing Act (1997) allows municipalities to expropriate land “for the purposes of housing development in terms of any national housing programme”. However, the municipality must have been unable to purchase the land through reasonable terms set by the owner and it is required to obtain permission from the member of executive council responsible for housing matters in the province.

But according to section 25 of the constitution, the state may not expropriate property without compensation.

“At the moment, as the law stands, any expropriation would have to be done subject to just and equitable compensation,” Michael Clark, a legal researcher and advocacy officer for legal nonprofit Ndifuna Ukwazi, told Africa Check.

South Africa’s parliament is undertaking a process to amend section 25 of the constitution to allow expropriation without compensation. And a new expropriation bill was gazetted in 2020 which says that “it may be just and equitable for nil compensation to be paid where land is expropriated in the public interest”.

But Nomzamo Zondo, the executive director of Seri, told Africa Check that the current draft of the expropriation bill would not empower municipalities to expropriate land on their own.

Promise: “In every EFF municipality, households which depend on social grants will qualify for free basic services without having to register on the indigent database.”

Verdict: Municipalities determine indigent household funding and the database is only administrative.

Since 2001, municipalities have provided basic services such as water and electricity for free or at subsidised rates to the poorest families. These households, called “indigent households”, are required to register on a database. Municipalities are partially subsidised by the national government to cover indigent funding.

South Africa has a number of different social grants, including the child support grant, the old age pension and the disability grant. Each of these grants have their own criteria determined by the country’s social security agency which falls under the department of social development.

Dr Andrew Siddle from UCT told Africa Check that the purpose of indigent databases was for municipalities to know which households needed funding.

Municipalities can charge property rates and a surcharge on the services they provide. Property rates are taxes based on the market value of a property.

The Municipal Fiscal Powers and Functions Act (2007) outlines municipalities’ powers to impose taxes. According to section 5, municipalities must apply to the minister of finance if they want to impose a new municipal tax for approval.

But according to section 229 of the constitution, “no municipality may impose income tax, value-added tax, general sales tax, or custom duty”.

Michael Evans, from law firm Webber Wentzel and a constitutional law expert, told Africa Check municipalities were “very limited” in what they could do in terms of taxes.

Dr Andrew Siddle from UCT said that although municipalities had the ability to determine tariffs such as water and sewage it “has to be related to the actual cost of providing the service”.

Municipalities can determine the municipal valuation of properties which in turn will determine how much property tax must be paid. But the Municipal Property Rates Act (2006) imposes certain limits on how property rates can be determined.

Promise: “Every EFF municipality will establish construction companies that will employ artisans and engineers on a full time basis to build, maintain and refurbish all municipal infrastructure.”

Municipalities are permitted to establish companies, known as municipal entities. According to section 82 of the Municipal Systems Act (2000), municipalities may “establish a company, co-operative, trust, fund or other corporate entity to provide [a] municipal service as a municipal entity under the ownership control of that municipality”.

Municipalities can also acquire ownership control of an existing company “which as its main business intends to provide that municipal service in terms of a service delivery agreement with the municipality”.

Michael Evans from Webber Wentzel law firm told Africa Check that municipalities had to  be the majority shareholders of municipal entities.

“They can’t have a minority stake. It would have to be under the ownership control of the municipality if they were to do that,” he explained.

But Andrew Siddle from the University of Cape Town warned that many municipalities would be unable to afford to run fully staffed construction companies.

Verdict: There is no privately owned bulk water infrastructure.

The 1997 Water Services Act sets out the regulatory framework for water services. According to the act, water boards are responsible for providing water services to municipalities and industries under their jurisdiction. There are nine water boards, which include Rand Water, Umgeni Water and the Breede‐Gouritz Catchment Management Agency. They fall under the department of water and sanitation.

Anton Earle is the Africa regional director of the Stockholm International Water Institute, a nonprofit that focuses on water governance. He told Africa Check that no bulk water infrastructure in South Africa is privately owned.

“Municipalities would generally purchase bulk treated water from the water boards and then assume the legal responsibility for the distribution, storage and supply of this water across municipally-maintained networks,” he said.

He added that private companies can have concessions to treat, store, and distribute water as well as invest in maintaining and upgrading water infrastructure, according to agreements with municipalities. An example of this is Silulamanzi, a private water treatment company given a 30 year concession from the Mbombela municipality in Mpumalanga.

But, Earle said, “there is no ownership of the water infrastructure by Silulamanzi. It all remains the property of the municipality with the private company merely having a concession to operate it."