South Africa’s president, health minister and cabinet have all boasted about it – South Africa’s antiretroviral therapy programme is the “world’s largest”.

If true, it’s a spectacular about-turn from just over a decade ago when NGOs like the Treatment Action Campaign went to court to force the South African government to implement a national prevention of mother-to-child transmission programme.

So, how big is South Africa’s programme? And how does it stack up to other countries’ around the world?

Statistics South Africa estimated that in 2015 there were 6.2 million people in the country living with HIV. According to the department of health, half of those were antiretroviral therapy at the end of March 2015.

Before January 2015, HIV+ people were started on antiretroviral therapy when their CD4 count (a measure of how well a person’s immune system is working) fell below 350 cells per cubic millimetre of blood. Treatment is now started when it falls below 500. (The CD4 count of a person who is in good health generally ranges from 500 to 1,200.)

Pregnant women who are HIV+ are now also automatically started on life-long treatment irrespective of their CD4 count.

The latest international comparison of the size of antiretroviral therapy programmes around the world is for 2013.


According to World Health Organisation data, South Africa had the world’s largest antiretroviral therapy programme in December 2013 with 2.6 million people on treatment then. The second largest one was India’s, which was treating 747,175 people at the time.

Is the data accurate?

“That South Africa has the largest antiretroviral therapy programme in the world is not in question, but I don’t think anyone could give an exact number of people on treatment,” the ‎deputy medical coordinator at Doctors Without Borders in South Africa and Lesotho, Amir Shroufi, told Africa Check.

According to Shroufi, South Africa does not have a single data system that tracks all patients on treatment and, importantly, removes patients who stop taking their medication or die.

Head of policy at HIV lobby group Treatment Action Campaign, Marcus Low, told Africa Check that “most experts consider the numbers to be pretty accurate… [but that] South Africa is still in the process of switching to electronic patient records which should improve accuracy”. 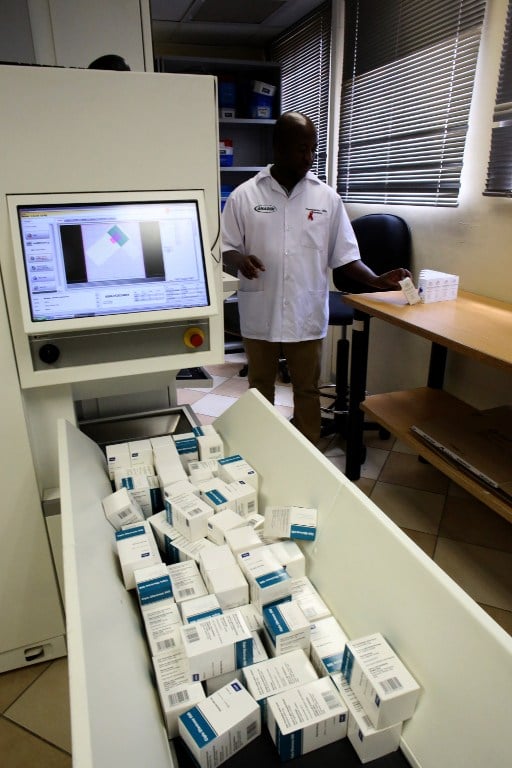 A sugar cane worker gets tested for HIV by a health worker working with Medecins Sans Frontieres in November 2014 on the outskirt of Eshowe in KwaZulu-Natal. Photo: AFP/GIANLUIGI GUERCIA" />

However, the quality of an antiretroviral therapy programmes counts too.

Shroufi emphasised that an effective antiretroviral therapy programme, irrespective of size, needs to find people who need treatment, get them to healthcare services, keep them in care and ensure they take their medicine regularly.

Low echoed these sentiments: “We shouldn’t chase numbers at the expense of quality of care. Quality of care is important to ensure people stay on treatment.”

“It is, for example, essential to reduce the number of medicine stock-outs and to ensure there are sufficient counselling and defaulter tracing capacity in the system.”

The advocacy group Stop Stockouts Project monitors stock-outs of HIV and TB medicine in South Africa. It relies on patients and healthcare workers to report medicine stock-outs in healthcare facilities around the country.

The project undertook a national survey of 2,499 health facilities between October and November 2014. It found that 14% of healthcare facilities reported a stock-out of medicine used for adult HIV treatment, 3% for medicine for the prevention of mother-to-child transmission and 6% for paediatric HIV treatment.

“Patients who require HIV treatment require this treatment for life and one of the most difficult things that we’re facing today is supporting patients to ensure that they stay adherent and take their medicine every day,” explained Tafeni.

The latest international comparison showed that South Africa’s antiretroviral therapy programme was the largest in the world, with 2,623,271 people on treatment in December 2013. This was bigger than the size of India, Zimbabwe, Kenya and Mozambique’s programmes combined.

The latest figures from South Africa’s department of health show that the number of people on treatment increased to 3,103,902 in March 2015.

Experts said that while the exact number of people on treatment may vary from government figures, it is undoubtedly the world's largest programme.

Are 60% of sex workers in South Africa HIV positive? The data is limited

Does the carnage on S. Africa’s roads claim more lives than AIDS and TB?

Has Jacob Zuma hurt the fight against AIDS more than Thabo Mbeki?