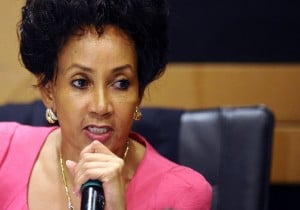 Lindiwe Sisulu, South Africa’s new Minister of Human Settlements, has claimed that the African National Congress won “the mandate of 62% of the people of this country” in the 2014 election.

The claim was one of a number of questionable claims made by Sisulu during a parliamentary debate on President Jacob Zuma’s post-election State of the Nation address.

In her address, Sisulu said that critics of the ANC “forget…that we…came here [to Parliament] on the mandate of 62% of the people of this country”. She then said: “When the President speaks, he speaks on behalf of 62% of the voters”.

Sisulu’s claim that the ANC has the mandate of 62% of all South Africans is false. South Africa has a population of around 53-million. According to the most recent national census, an estimated 31,4-million people are eligible to vote. Around 25,3-million people registered to vote in the 2014 general election. But only about 18,4-million ended up voting and the ANC garnered 11,4-million votes or 62%. This equates to 22% of all South Africans voting for the ANC or 36% of eligible voters voting for the ANC.

Sisulu’s second statement referring to Zuma speaking on “behalf of 62% of the voters” is more accurate. - Africa Check 19/06/14