In a tweet encouraging people to exercise, the City of Tshwane municipality shared alarming statistics about how many South Africans were overweight.

“According to Healthy Living Alliance almost 70% of women and 39% of men are overweight in South Africa,” it claimed. It added that “the country has the highest obesity rate in sub-Saharan Africa”.

According to Healthy Living Alliance almost 70% of women and 39% of men are overweight in South Africa and the country has the highest obesity rate in Sub-Saharan Africa. #WalkForYourHealth #IChooseToBeActive

The same claim was made a few days earlier by the South African Government News Agency.

Are there really this many overweight people in South Africa?

The Healthy Living Alliance describes itself as “an alliance of organisations with a mission to improve the health of an increasingly obese South Africa”. It includes organisations like Health-e News, Section27 and the Treatment Action Campaign.

The organisation has a slightly different claim on its website: “Up to 70% of women and a third of men [are] classified as overweight or obese.”

What is an unhealthy weight?

The body mass index (BMI) is used to find out if a person’s weight is healthy or not. It looks at their weight in relation to their height.

A person is considered overweight if they have a BMI of 25 or above, but lower than 30. A woman 1.65 metres tall and weighing 68 kilograms has a BMI of 25.

Someone is considered obese when they have a BMI of 30 or higher. A man 1.75 metres tall and weighing 92 kilograms has a BMI of 30.

The Demographic and Health Survey estimated that 68% of women aged 15 years and older were overweight or obese. This is in line with the figure tweeted.

In comparison, just 31% of men were overweight or obese. This is lower than the tweet suggested.

The World Health Organisation (WHO) provides comparable obesity estimates for countries around the world.

This was the highest obesity rate for the sub-Saharan African countries that the WHO collects data for. Botswana was in second place with an obesity rate of 18.9%. - Kate Wilkinson (22/08/2018) 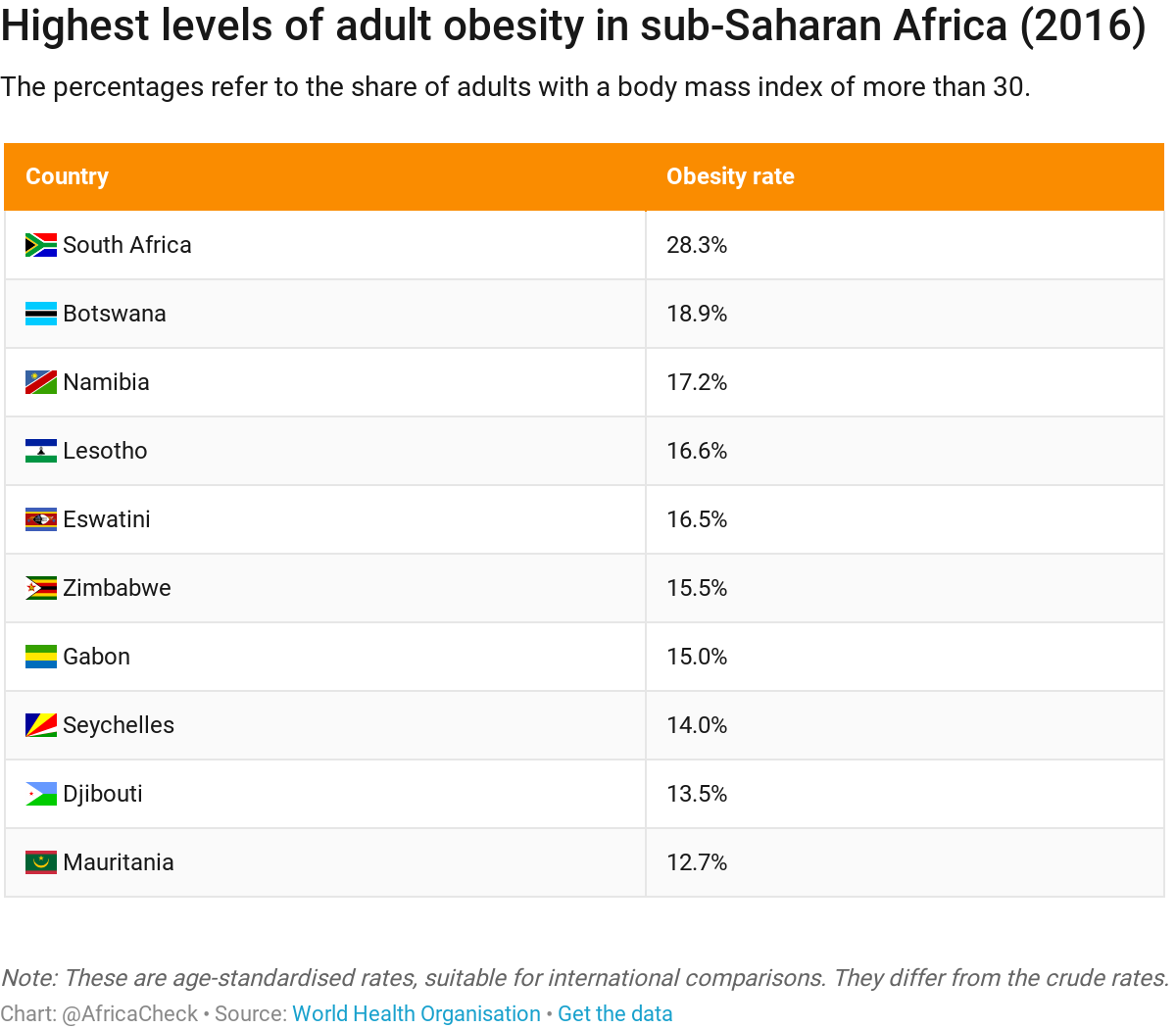