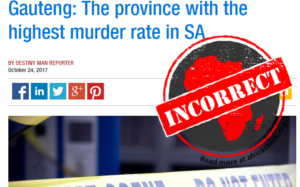 South Africa’s Gauteng province has the “highest murder rate” in the country, Destiny Man reported this week based on copy from the African News Agency. This followed the release of South Africa’s annual crime statistics.

However, this statement is incorrect and is based on a misunderstanding of crime statistics.

This needs to be taken into account when determining where in South Africa someone is most likely to be murdered, which is reflected by the murder rate.

When you plug the numbers for Gauteng into the murder rate formula it produces a murder rate of 29.5 murders for every 100,000 people in the province.

The province with the highest murder rate in 2016 was the Eastern Cape. It recorded 3,628 murders, but its population of 6,493,176 is half the size of Gauteng’s population.

These numbers produced a higher murder rate of 55.9 murders for every 100,000 people in the province.

The province with the lowest murder rate was Limpopo.

Note: When the South African police released the crime statistics on 24 October 2017 they did not disclose which population estimates had been used to calculate the crime rates. This spotcheck previously contained provincial murder rates calculated with the most recent estimates for 2015 and 2016. The police informed Africa Check on 2 November 2017 that they used Statistics South Africa’s population estimates for the end of September of each financial year. This spotcheck has been updated to reflect that.