NBC News gets it wrong on kidnapped Nigerian girls 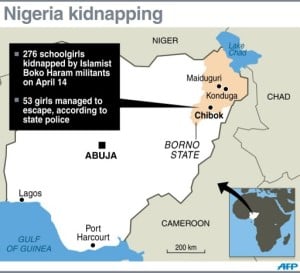 Everybody makes a mistake from time to time, but it is difficult to know how NBC News made this one.

This video shows NBC anchor Brian Williams opening the evening news bulletin last night from New York with the efforts under way to find the schoolgirls abducted three weeks ago in Nigeria.

"Good evening," he declares, and goes on:

"Tonight it now feels as if the world is aware and responding to the kidnapping of two-hundred seventy-six schoolgirls in Kenya three weeks ago today.

"After a bold and scary video from the terrorists involved promising to sell the young women they have abducted, tonight the United States has a team en route to help find those who are still being held. They are all ages 15 to 18. In the meantime we learned today eight more female students have been abducted in Kenya."

For the avoidance of doubt, the girls were abducted from Chibok, in northeast Nigeria, approximately 2,000 miles from Kenya, on the other side of the continent.

It is hard to imagine NBC News, one of the United States' most respected news channels, making such a mistake with an event such as this taking place in Europe or Latin America. Africa Check - 07/05/2014