“We could have up to, say, 38 or 39% of young people unemployed,” Ramaphosa said in September 2018. He was responding to a question by the ANC’s Hunadi Mateme about a new paid work experience programme.

The Youth Employment Service initiative seeks “to provide work experience for young people on a scale that would be significant and lasting enough to have an impact on employment”, Ramaphosa said.

His spokesperson, Khusela Diko, has not responded to Africa Check’s questions about the source of the statistic.

Who is a young person? 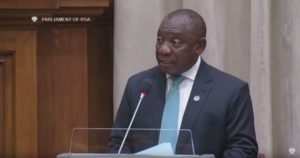 President Cyril Ramaphosa answers questions from members of the National Council of Provinces on 11 September 2018.

The United Nations defines a young person as someone aged 15 to 24. But the definition differs across organisations and countries.

In its African Youth Charter, the African Union identifies youth as “every person between the ages of 15 and 35 years”.

According to the agency’s latest Quarterly Labour Force Survey, 38.8% of people aged 15 to 34 were unemployed in the period from April to June 2018. This was an increase from 38.2% in the first three months of the year. (Note: By comparison, the national unemployment rate for South Africa was estimated at 27.2%.)