In 2015, “Quokka selfies” went viral as tourists posed with the alleged “happiest animal on earth”, a marsupial that hails from Australia.

Now, the Australian animal is being used to make “bad parents” feel better by calling into question the quokka’s parenting.

A meme, shared on Facebook in South Africa, makes the following claim: “Feeling like a bad parent? Quokkas toss their babies at predators so they can escape.”

It was flagged as possibly false by Facebook’s fact-checking system. But is it true? 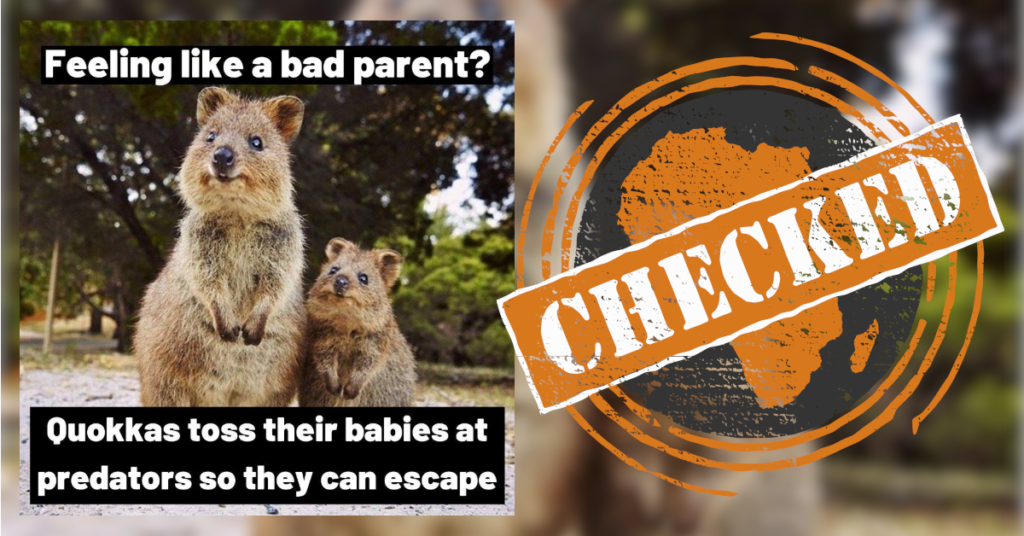 Quokkas are a type of wallaby, and part of the macropod family, like kangaroos. They are found on two offshore islands (Rottnest Island and Bald Island) and a number of mainland sites in Western Australia.

Stephen Catwell, acting supervisor of zoology and quokka species coordinator at Perth Zoo in Australia, told Africa Check that while macropods may have their joeys, or young, fall out of the pouch when they are fleeing from a predator, “Quokkas don't toss their babies at predators so they can escape”.

The quokka’s pouch is an ‘anti-predator characteristic’

However, while quokkas may not be “tossing” their young at predators, there is research to show that releasing their young is an anti-predator characteristic.

Matthew Hayward, associate professor of conservation biology at the University of Newcastle, Australia, explained to Africa Check that macropods have strong control over their pouch muscles and one of the anti-predator responses in females with larger young is to relax their pouch muscles so the joeys drop out.

The young will lay writhing and hissing on the ground, attracting the predator’s attention, while the mother escapes. “This makes evolutionary sense because the mum is a proven breeder, whereas the young may be infertile,” says Hayward.

So the quokka’s reputation as a bad parent is in part justified.