This article is more than 5 years old


A South African radio host read out the website address where a “cure” for diabetes could supposedly be found on his show.

Talk Radio 702’s Xolani Gwala had received a message from an “old man” called Travis Harris, who said he had been a diabetic for more than 30 years.

“It seems there is no real answer to healing diabetes,” the message read, “but that is no longer the case. I have discovered that American doctors are now able to heal diabetes naturally."

After reading the website address, Gwala asked his listeners whether they had visited it or know “what this new invention from American doctors is?”

“I’m sure a lot of people would want to hear this because you are right about the increase in diabetes in South Africa. It is frightening.” 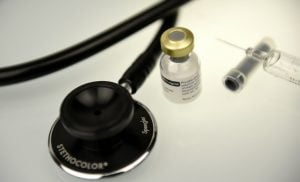 A picture showing a solution for the treatment of severe hypoglycemia that may occur in people with diabetes. Photo: AFP/Franck Fife

Diabetes is a chronic disease. While type 1 usually commences in childhood or adolescence and is believed to caused by "a complex interaction between genes and environmental factors", type 2 is more common and mainly associated with unhealthy lifestyles.

Worldwide, the prevalence of diabetes has nearly doubled since 1980. And over the past decade, it has risen faster in low- and middle-income countries than in high-income countries, according to the World Health Organisation.

In South Africa, diabetes was listed as the second leading cause of natural death on death certificates in 2015, after tuberculosis.

Africa Check visited the website mentioned on Radio 702. It contains a number of claims, including that “medics will tell you that the disease is not fatal but that's not true. Truth is diabetes can be healed naturally.” However, it did not explain how this is supposed to happen.

The website doesn’t contain a contact email address or phone number. However, the author says he “was diagnosed with diabetes nearly 30 years ago” and is receiving medication for the condition. (Note: Radio 702 wouldn’t divulge the contact information for Trevor Harris.)

The station’s PR manager, Pippa Rowles, told Africa Check that the station’s presenters and producers “are flooded with emails during their shows and need to make quick editorial decisions based on the needs of the show and audience at that point in time”.

“[Xolani] did not advocate any viable solution or treatment, but merely invited a discussion on the topic as it is of broad interest.

“As with any topic discussed on air, different views are encouraged and we would have and still welcome opinions that tackle the claims made by the listener who had sent the email.”

No case has been cured before

As Africa Check reported earlier this year, diabetes cannot yet be cured.

“There is, to date, no cure for this disease,” the director of the department of diabetology, endocrinology and metabolic disorders of the Paris Saint-Joseph Hospital in France, Dr Dominique Huet, told us.

“Every six months someone presents a new plant or a new miracle treatment,” he added. “But until now, no treatment – even the sophisticated treatments of medical science – has succeeded in curing a single case of diabetes.”

“I find all this charlatanism and giving false hope to patients dangerous.”

Science communication specialist and journalism professor George Claassen checked credible journal databases, such as Pubmed or EurekAlert, for reports of a cure.

“If it has not been published in a peer reviewed journal, it is a bogus claim,” he told Africa Check. “This would have been great and important news. It was not reported at all by scientific news websites.”

“The role of the media is vital to test and refute [false] health claims. No journalist should publish or broadcast a claim like this without giving context.”

He said it was “irresponsible journalism and media practice to just read this claim” without establishing the evidence for it. - Ina Skosana (31/07/2017)