In a TV interview that left many aghast, employment minister Chris Ngige said he wasn’t worried about Nigeria losing its doctors to other countries.

Ngige, himself a medical doctor, said the country had more than enough doctors and so could export them. “We have a surplus in the medical profession in this country. I can tell you this. It is my area; we have excess. We have enough, more than enough. Quote me.”

The minister’s April 2019 remarks triggered a sharp debate, with many medical professionals weighing in. The next day, Ngige released a statement that largely maintained his position. He said the problem was that Nigeria didn’t have enough health facilities to absorb all its doctors, so the rest left for other pastures. 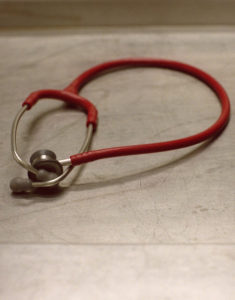 Many people disagreed with the minister, but none challenged his claim of a WHO-recommended ratio. Media reports had academics and medical workers’ unions referring to the ratio, often giving it as one doctor to 600 “citizens”, “patients” or “persons”. (Note: Estimating the number of patients at any given time is difficult, so most reports use the doctor-to-population ratio as a proxy for coverage, an expert said.)

But the WHO has not prescribed any ideal ratio of healthcare workers to a population, Dr Mathieu Boniol, a statistician at the UN health agency, previously told Africa Check.

Boniol said the WHO might have published some estimates for research and comparison purposes, but “a country’s number of healthcare workers should be adapted to its needs and the characteristics of its national health labour market”.

Nearly half the world’s countries understaffed


For example, the WHO’s 2019 health statistics overview says countries with fewer than 10 doctors – and 40 nurses and midwives – for every 10,000 people are considered to not have enough healthcare professionals.

This works out to one doctor and four nurses and midwives for every 1,000 people.

The WHO says 45% of the UN’s member states do not meet this threshold. It estimates Nigeria had 3.8 physicians per 10,000 people in 2013, the most recent year for which it has data.

A 2016 WHO global health staffing plan estimated that 4.45 skilled health workers (physicians, nurses and midwives) for every 1,000 people were needed to meet the sustainable development goal on good health.


Broad doctors-to-people ratios can’t show the spread of doctors across a country, and don’t say if the doctors are in public or private practice, an expert previously told Africa Check.

But ratios are still important, and vary from one country to another, Prof Tanimola Akande, who teaches epidemiology and community health at the University of Ilorin, told Africa Check.

There should be a minimum number of people that healthcare workers take care of at a time, he said.

“Nigeria is behind in terms of minimum requirements for both doctor-to-population and doctor-to-patient ratios. The country needs to address these for it to improve in various health indices.”