In the twilight of his final term, Nigerian president Muhammadu Buhari has been keen to talk up his legacy as the February 2023 elections approach. In this analysis, we go deeper behind the numbers in a much-discussed news article.

Nigerians are debating president Muhammadu Buhari’s legacy as the clock ticks down on the last of his two elected terms in office.

The country will elect a new leader in February 2023. 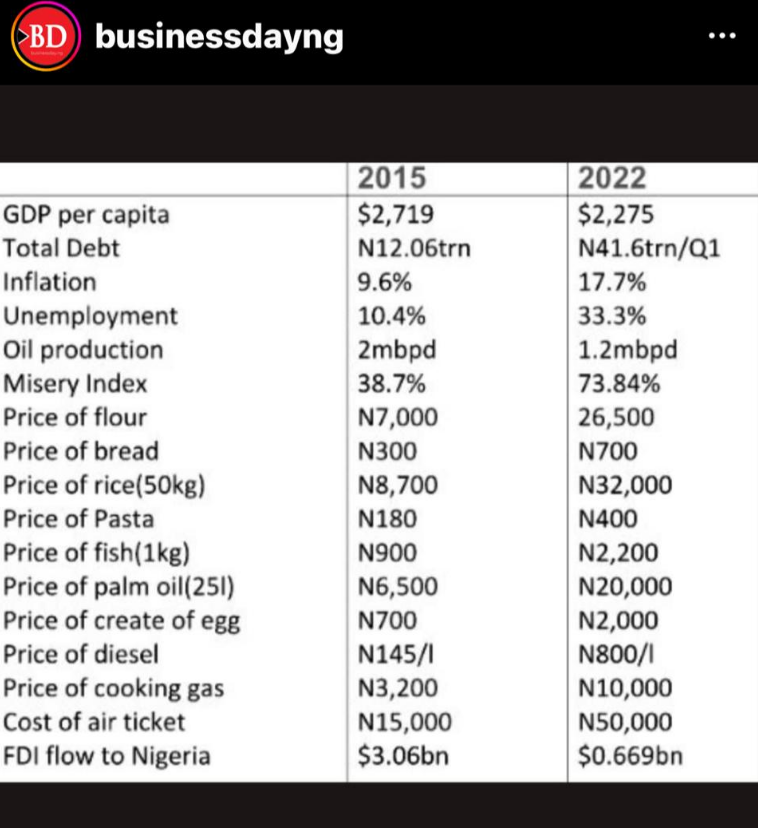 In June 2022, 79-year-old Buhari gave a wide-ranging interview to the US media company Bloomberg. In what at times read like a victory lap, Buhari was eager to show that he would be leaving the country better than he found it.

The Nigerian media took on several of his claims. In a much-discussed article, Business Day compares the economy before Buhari took office in May 2015 to its current state.

The article, headlined “Buhari gets the rebuke for saying Nigerians are better off today than in 2015”, is behind a paywall, but snippets of its key arguments have been doing the rounds online.

The newspaper uses economic indicators such as inflation, unemployment, debt and oil production to make its comparisons.

In this analysis, we take a quick look at the accuracy of seven of the article’s 18 indicators  and, with the help of economists, go deeper into their context.

Gross domestic product (GDP) is a widely used measure of the total value of goods and services produced in a country and bought by consumers in a period of time, such as a year.

The International Monetary Fund (IMF) says that “when GDP is growing, especially if inflation is not a problem, workers and businesses are generally better off than when it is not”.

Then there’s GDP per capita, which considers a country’s total population. According to the World Bank, this measure gives a basic idea of the value of output per person, as sustained economic growth tends to reduce poverty.

All three estimates show a decline. This could be due to the population growth amid economic downturns, economist Tope Fasua told Africa Check.

Fasua is the chief executive of Global Analytics Consulting, a public financial management firm with offices in the country.

“Nigeria’s population has kept growing even when GDP growth was negative in some quarters. We were in a recession in 2016, and in 2021 due to the pandemic, and amid all that, the population kept growing.”

Nigeria’s GDP contracted in 2016 after prices of crude oil, its largest foreign exchange earner, dropped. In 2020, the economy faced the twin threats of the Covid pandemic and low crude oil prices, slipping into a recession when it shrank by 1.8%.

But why do the IMF and World Bank’s GDP estimates differ so widely? Fasua said it may be because they used different methodologies.

“In calculating statistical data, there are some assumptions to be made and it is difficult for two institutions to arrive at the same figures. However, it is clear that Nigeria's GDP per capita is currently lower than it was in 2014.”

SOURCE: DMO. Data rounded up. *Based on the prevailing exchange rate at the time.

The Business Day article puts Nigeria’s public debt at N12.06 trillion in 2015 – about N50 billion short of the debt office’s June 2015 figure. The newspaper’s 2022 debt figure is N41.6 trillion in the first quarter, in keeping with the official data.

Nigeria’s financial year runs from 1 January to 31 December. The three months from January to March are the first quarter, April to June the second quarter, and so on.

There’s little doubt the country spends a lot of its revenue repaying debt. Data from finance minister Zainab Ahmed shows that the country spent N1.94 trillion servicing its debts from January to April 2022, or 118% of the N1.64 trillion revenue it made in that period.

(Note: For more on foreign debt see our April 2021 factsheet on Nigeria’s debt to China, and our June 2022 report on the country’s controversial fuel subsidy.)

Analysts have urged the country to improve its public finances by, for example, increasing its tax base and diversifying its sources of income.

The National Bureau of Statistics (NBS) publishes monthly data on the average change in the prices of goods and services over time. A rise in prices is known as inflation.

Business Day says inflation was at 9.6% in 2015, but this is the rate for December 2015 – seven months after Buhari became president.

We asked economist Fasua where to start looking. “One can’t validly use data from the full year 2015 because there has been a change of government,” he said.

“I think it would be fair to start looking at the data from the second quarter of 2015 from where the previous government left things.

“Alternatively, one may use data from the first quarter to take away any influence that the Buhari administration may have had in the last month of the second quarter of 2015.”

Some government policies have increased inflation

The next question to ask is whether the government caused prices to rise.

“Have policy decisions led to higher inflation? Yes,” Kalu Aja, a financial analyst based in Lagos, Nigeria, said in response to our questions.

“Nigeria's inflation is measured by the consumer price index and food accounts for about 50% of the index. If food prices rise, inflation rises.”

The consumer price index measures the average change over time in prices of goods and services people need for day-to-day living.

Aja said the government’s closure of land borders and failure to secure food baskets in the north had led to higher inflation.

In August 2019 Nigeria blocked the movement of goods by road from neighbouring countries in a bid to stop illegal imports of rice and other agricultural products. Drugs and arms were also targeted. The closure lasted for two years.

He added that the constant violence and insecurity in some northern food-producing states had also reduced the supply of food to markets, again leading to higher prices.

In July 2022 inflation reached a 17-year high, with both domestic and international causes – such as the conflict in Ukraine – blamed.

The NBS defines unemployment as where a person does not work at all or works for less than 20 hours a week.

The statistics bureau uses data from 33,000 households across the 36 states and the federal capital territory to work out the unemployment rate.

The Business Day article says the unemployment rate was 10.4% in 2015. But this is again for the fourth quarter of the year. Buhari took power during the second quarter of 2015, when official data puts unemployment at 8.2%.

By the fourth quarter of 2020, Nigeria’s unemployment rate had increased to 33.3%. This is the latest data available and tallies with the rate given by the publication.

The NBS also looks at underemployment. Underemployed people work for at least 20 hours a week, but for less than 40 hours. People in jobs that underutilise their skills or educational qualifications are also considered underemployed.

Nigeria’s high unemployment rate was due to a growth in the working age population amid scarce job opportunities, the World Bank said in a 2021 paper. The paper cited the 2016 recession and the Covid pandemic.

In a joint survey, the NBS and the United Nations Development Programme found 43% of Nigerian business owners reported a decline in their workforce. Another 20% of respondents who were full-time employees lost their jobs.

The survey interviewed 3,000 businesses – formal and informal – across the country.

A large portion of Nigeria’s revenue and foreign exchange earnings are from crude oil.

According to quarterly GDP data from the statistics bureau, Nigeria’s average crude oil production was 2.6 million barrels a day in the second quarter of 2015, when Buhari was sworn in.

By the end of the first quarter of 2022, the bureau says, Nigeria’s average daily crude oil production had dropped to 1.49 million barrels.

Nigeria was until recently Africa’s largest crude oil producer. But in June 2022 Angola’s crude oil output was higher, according to official figures from the Organization of Petroleum Exporting Countries (Opec).

Pipeline vandalism and moves by international companies to sell some of their oil assets in Nigeria have affected production.

Opec’s data has consistently given Nigeria a lower oil output than data from the statistics bureau.

In March, the Nigerian Upstream Petroleum Regulatory Commission estimated that the country had lost $7.72 million a day to oil theft from January 2021 to February 2022.

The economist said the sale of investments and assets by international oil companies was also influenced by Nigeria’s hostile business environment, inconsistent government policies and pressure to increase investments in green energy.

“Nigeria used to sign joint venture contracts with these companies for crude oil exploration but that has evolved into production-sharing contracts because the country can’t meet its end of the bargain and we might still be owing these companies some money,” he said.

“Nigeria’s cost of producing one barrel of crude oil sometimes gets as high as $25 when other countries drill at a much lower cost. All these eventually affect production.”

The misery index was created by Arthur Okun, a US economist, to give a snapshot of the health of an economy. The index is calculated by adding the inflation and unemployment rates.

There are other versions of the index. One of the most recent is Hanke’s misery index developed by Steve Hanke, a professor at John Hopkins University in the US.

In a November 2021 interview, Hanke said other indices such as bank lending rates and GDP per capita should also be considered.

The Hanke misery index is calculated by subtracting the annual percentage change in real GDP per capita from the sum of year-end unemployment, inflation and bank lending rates.

Hanke’s misery index did not calculate a rate for Nigeria in 2015 as “only countries with current data” were considered. In 2022, Nigeria ranked as the 11th most miserable country of 156 countries, with a misery index of 59.4.

“The misery index can affect investor sentiments. Prices are higher due to a fall in purchasing power and there are no jobs,” Aja told Africa Check.

“Foreign investors are seeking markets to sell their brands and if investors can’t trade products due to high inflation, they will not come.”

But some consider the index to be an inexact metric. Others say that it can give a general feel for economic conditions, but misses key information about the present state of the market. Other identified blindspots include consumer experiences and labour force participation.

According to the statistics bureau, there are three types of capital imports into Nigeria: foreign direct investment (FDI), portfolio investment and “other” investment.

NBS data puts the total value of FDI at the end of the second quarter of 2015, when Buhari took office, at $211 million. It was 1.44 billion for the full year.

But the World Bank gives a much higher figure of $3.06 billion in 2015, the exact amount in the Business Day article. The World Bank’s data sources include the IMF’s balance of payments database, the United Nations Conference on Trade and Development, and official national sources.

But the Business Day article puts FDI flow into Nigeria in 2022 at $669 million.

Hassan Oaikhenan is a professor of international economics at the University of Benin in Nigeria’s Edo state. He told Africa Check that businesses find the country’s operating environment to be hostile.

He noted that FDI had fallen under Buhari. “There are some factors that can be blamed for the decline in foreign investment inflow. The Covid pandemic is one of the most recent occurrences to blame.”

“Nigeria is ranked one of the top countries on the global terrorism index. It has also performed poorly in the fragile states index."