Death of 10 in Germany after Covid-19 vaccine a coincidence, not likely linked to shot, experts say

A screenshot of an article with an alarming headline has been widely shared on Facebook in South Africa and the US. Dated 14 January 2021, it reads: “10 Dead in Germany after Receiving Pfizer Covid-19 vaccine.”

The article shows what looks like a stock photo of a patient in a hospital bed, being cared for by someone in full personal protective equipment.

Below is a summary: “On Thursday, 10 people were pronounced dead in Germany after receiving Pfizer and BioNTech COVID-19 vaccines, according to the German News Agency (DPA).”

The screenshot has been viewed 17.6 million times so far, and shared about 145,000 times. But is the headline accurate and are social media users right to be concerned? 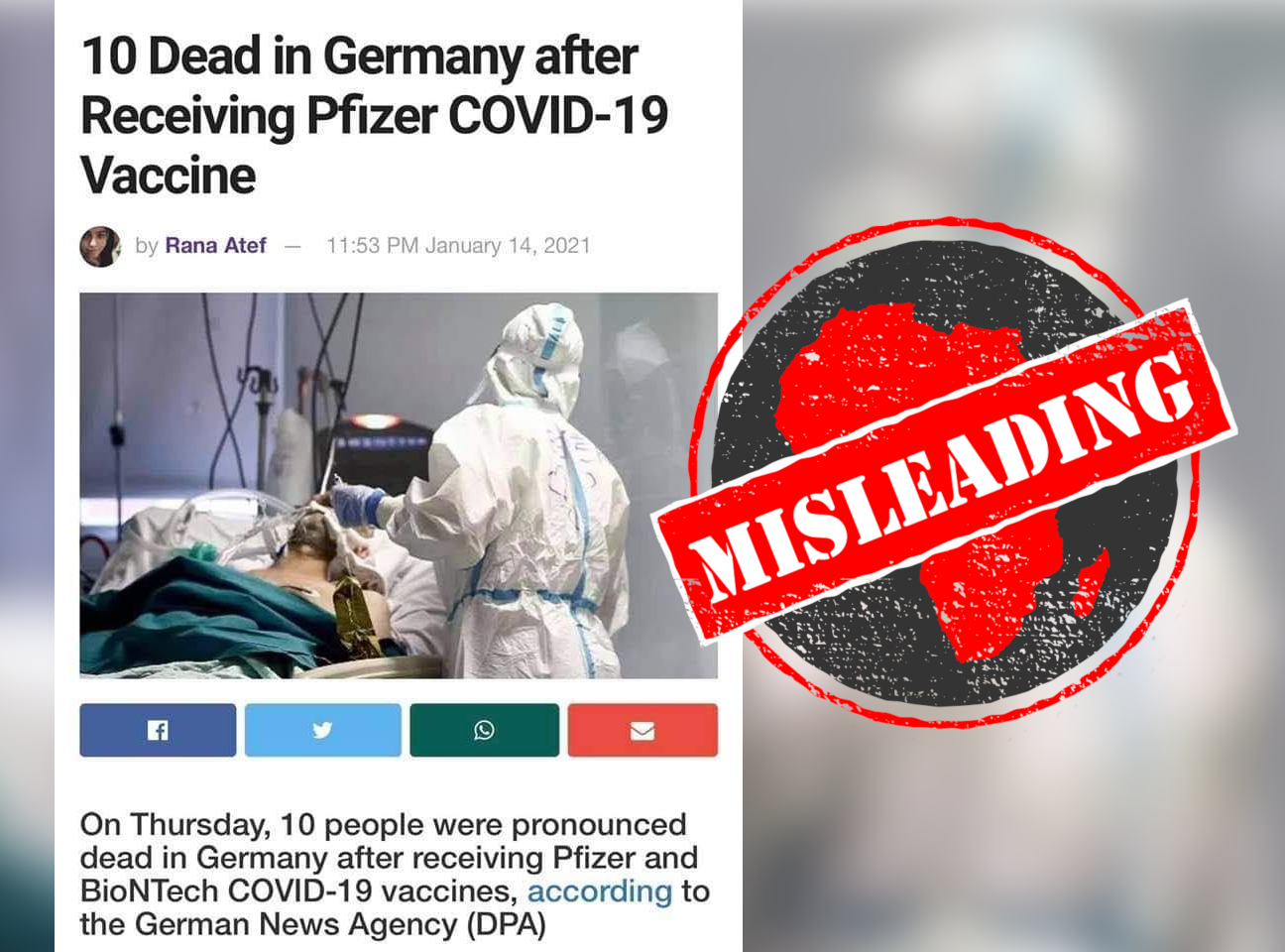 Googling the headline and the journalist’s byline – “Rana Atef” – leads to what appears to be the original article, published by the Egyptian news magazine Sada El-Balad English.

The short article quickly reveals that the headline shared on social media is misleading.

The article’s opening paragraphs, not included in the screenshot, read: “The [German News] agency expressed that the dead suffered from serious diseases and they passed away four days after being vaccinated. According to medical sources, the complications of the diseases they had are the main reason for their death, not the vaccines.”

Searching for the original source, attributed to the German News Agency, or DPA, by Sada El-Balad, led to an article in German newspaper Süddeutsche Zeitung, with a similar headline: “PEI prüft 10 Todesfälle kurz nach Impfung.”

This translates to: “PEI is investigating 10 deaths shortly after vaccination.” PEI refers to the Paul Ehrlich Institute, the German federal institute for vaccines and biomedicines.

But the article immediately makes clear that experts at the institute think any connection between the vaccinations and deaths unlikely. It quotes Brigitte Keller-Stanislawski, head of the division for safety of medicinal products and medical devices, as saying that the patients who died had all been seriously ill with underlying conditions, and it was most likely these conditions that caused the deaths.

German news magazine Der Spiegel also quoted Keller-Stanislawski on the subject and added that all those who had died were elderly.

There is a great deal of misinformation circulating online falsely linking Covid-19 vaccines to sudden illness or death. This is another example of that. There is no compelling evidence that the deaths reported in the German media were caused by vaccination.

No, German plane not barred from Qatar for sporting rainbow flag in support of LGBTQI rights