“Contagion is a Myth,” reads the bold header of a graphic going around Facebook.

Contagion is when a disease is spread from one organism – a plant, an animal, a person – to another, particularly by touching. But is it a myth?

Text below the header attempts to explain: “A virus is actually the cells in your body creating exesomes to remove dead cells and toxic matter. You cannot catch exosomes from somebody else. However your body can detox at the same or similar time to others around you, which gives you the illusion of contagion.”

The graphic is an example of germ theory denialism, an old but newly popular conspiracy theory that denies centuries of scientific research.

At its core is the false idea that illnesses are not caused by pathogens, tiny organisms such as viruses and bacteria. Instead, it suggests that people’s lifestyle and diet, what they “eat, drink, say and do”, are the real cause of their illness.

Let’s explain why this is incorrect, what the graphic gets wrong, and why germ theory denialism has gained ground during the Covid-19 pandemic. 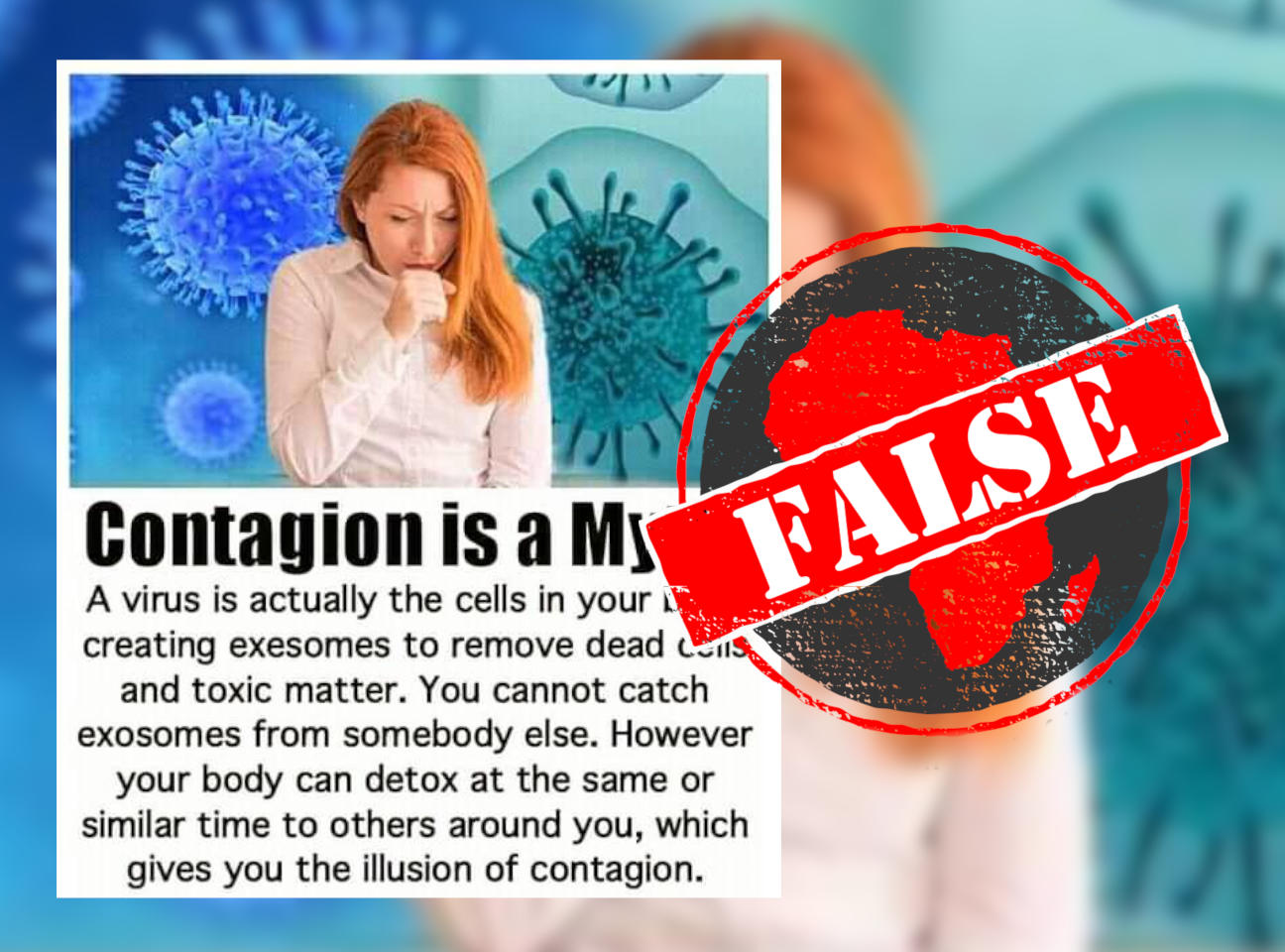 Plenty of evidence that viruses exist

The graphic is incorrect to claim that a virus “is actually the cells in your body creating exosomes to remove dead cells and toxic matter”. We’ll explain what exosomes are in a moment, but first: what is a virus?

A virus is a simple microscopic agent capable of infecting another organism. It consists of a small amount of genetic material that acts like a blueprint for new copies of the virus. To make copies of itself, a virus must infect another organism – a person, for example – and use the organism’s cells like factories to produce new viruses from the genetic blueprint.

Viruses can’t make copies of themselves without a host organism, or even exist for long outside a host. Because of this, there is substantial debate about whether viruses should be considered alive.

There is plenty of proof that viruses exist and cause disease. Flu viruses have been photographed in the process of infecting cells, under powerful microscopes. And their RNA, their unique genetic information, has been sequenced and studied.

The same is true of Sars-CoV-2, the virus that causes Covid-19. Its RNA has been sequenced many times since as early as March 2020. And Sars-CoV-2 has been photographed many times under an electron microscope.

But could viruses actually be exosomes, misidentified by scientists? In short, no.

Exosomes are complicated – but aren’t viruses

Exosomes are real, but definitely not the same thing as viruses. They are small sacs encased in the same membrane that surrounds cells, but exist outside cells – they are “extracellular”.

Unfortunately, exosomes are also complicated. Scientists are still making new discoveries about them. This makes them difficult to explain, and a great source of misinformation.

Exosomes were first described and named in the 1980s, with some studies beginning as early as the 1970s. But they were “largely ignored, forgotten or ... dismissed as a means of cellular waste disposal”, according to a 2016 article in BMC Biology.

More recently, exosomes have been found to be able to transfer proteins, genetic material and potentially even medical drugs between cells as they detach from one cell and are absorbed into another.

Jonathan Jarry, a science communicator at Canada’s McGill University, explains: “Our body is made of cells, and you can imagine a cell like a soap bubble. An exosome is a tiny bubble that buds off from that soap bubble and starts floating around, maybe eventually fusing with another soap bubble.”

This means they enable “communication” between cells. The discovery has led to a great deal of new research into exosomes.

But none of this research has shown that viruses are in fact exosomes created to remove “dead cells and toxic matter” from a sick person.

Because of their many functions, exosomes may contribute to some diseases. There’s evidence of exosomes being associated with the development of Alzheimer’s disease and the spread of prions. But they have also been linked to anti-tumour responses, which means they could help treat cancer.

The graphic is an example of the way the complex subject of exosomes has recently been hijacked to support germ theory denialism.

Germ theory lays out the tested and established fact that some diseases are caused by microscopic organisms – what we call germs. It is credited to several medical scientists working in the 19th century, among them the chemist Louis Pasteur.

Pasteur found that microorganisms were responsible for processes such fermentation, contamination of food, and disease – findings that have been repeatedly confirmed. But another chemist, Pasteur’s rival Antoine Béchamp, disagreed.

Béchamp believed that germs did not cause disease. Instead, “molecular granulations” which he named “microzymas” were everywhere, and developed into bacteria (and other germs) when something about their environment was abnormal.

Béchamp’s hypothesis was that pathogens were harmless unless the body or “terrain” they occupied was ill. This is why its supporters call it “terrain theory”.

Terrain theory is incorrect, but has attracted plenty of believers during the Covid-19 pandemic.

Science Based Medicine, a website dedicated to fact-checking medical misinformation, has thoroughly debunked the false claim that Sars-CoV-2 is not a virus. It writes that the idea has been widely promoted by Andrew Kaufman, a psychiatrist and “natural healing practitioner”.

Kaufman is also responsible for promoting other popular false claims about Covid-19.

For example, he says the cause of the disease has not been determined as it hasn’t satisfied a set of guidelines known as Koch’s postulates. Africa Check debunked this claim in March 2021, pointing out that Koch’s postulates are not followed to establish the cause of all diseases, and that modern procedures have sufficiently demonstrated that Covid-19 is caused by a virus.

McGill University’s Jarry sets out the evidence against Kaufman in an article headlined “The Psychiatrist Who Calmly Denies Reality”.

Kaufman, he says, “claims the coronavirus is instead an exosome, a natural transport vehicle made by our cells”. But “while exosomes do have some similarities to viruses, there is undeniable evidence that the coronavirus exists”.