No, DMX and other black celebrities not killed by Covid-19 vaccines – vaccines save lives

“These three black celebrities all died this year, within the same month that they received the COVID vaccine,” reads a tweet from a South Africa-based Twitter account, dated 10 April 2021.

“These are just facts but we are not sure if it’s coincidence or cause and effect.”

WHAT DO THESE MEN HAVE IN COMMON.

These three black celebrities all died this year, within the same month that they received the COVID vaccine.

These are just facts but we are not sure if it’s coincidence or cause and effect. pic.twitter.com/rPzBujbgP2

Text below the photos reads: “FACTS: These three black celebrities all died within the month they received COVID vaccine.”

It is true that Hagler, Aaron and Simmons all died in the first few months of 2021. But the suggestion that the three were killed by Covid-19 vaccines has been repeatedly disproven.

Several other Facebook posts have implied that the Covid-19 vaccine was responsible for these celebrity deaths. Some have stated it outright.

But fact-checkers, news organisations and family members have been quick to point out that there is no link between Covid-19 vaccines and the deaths of Hagler, Aaron and Simmons. 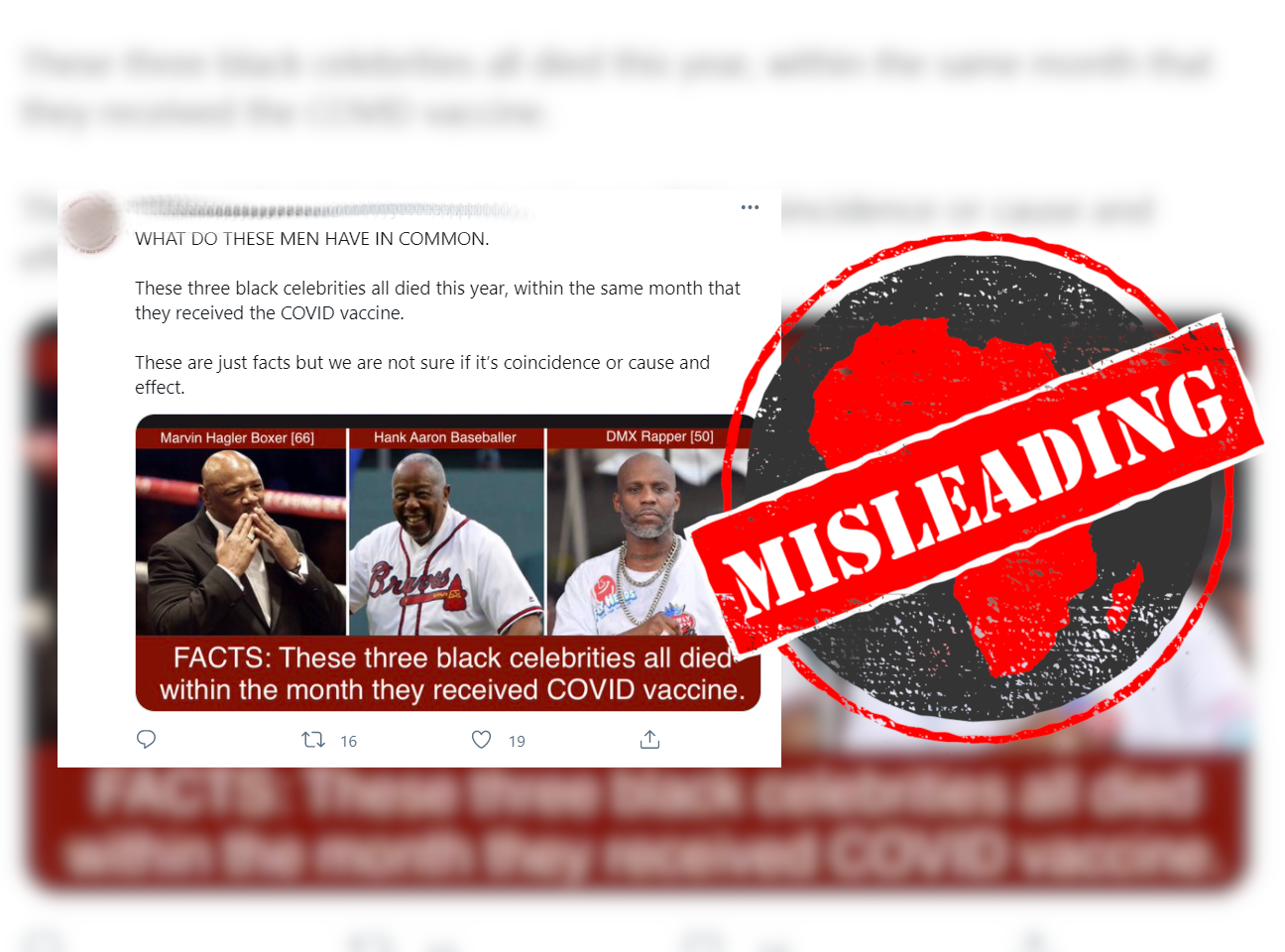 Hank Aaron died on 22 January 2021, at the age of 86. His prestigious professional baseball career began in 1952 and earned him the moniker “Hammerin’ Hank” as well as a presidential medal of freedom awarded by United States president George W Bush in 2002.

Aaron was vaccinated against Covid-19 on 5 January, and died 17 days later. Africa Check has already debunked an earlier suggestion that the vaccine caused his death.

As the New York Times reported, Aaron’s death had nothing to do with the vaccine. Dr Louis W Sullivan, the founding dean of Morehouse medical school where both he and Aaron got their Covid-19 jabs, told the Times that it would be absurd to attribute the baseballer’s death to the vaccine.

“It is though, if you might say, Hank was in a car before the day he died, and we try and attribute his death to being in a car,” Sullivan reportedly told the US station WSB-TV.

Medical examiners said “there was nothing to suggest that Mr Aaron had an allergic or anaphylactic reaction related to the vaccine”.

Marvelous Marvin Hagler died aged 66 on 13 March 2021. His celebrated boxing career saw him win 62 career matches to only three losses and two draws. He retired in 1987.

Rumours that Hagler’s death was related to the Covid-19 vaccine he received nearly three weeks before seem to have been started by former boxing rival Thomas Hearns. Hearns wrote in a since-deleted 14 March Instagram post that Hagler was “in the ICU fighting the after effects of the vaccine!”

Kay Hagler, Marvin’s widow, took to Facebook to dismiss the claims the following day. She wrote that she “was the only person close to him until the last minute” and urged the boxer’s fans not to believe the vaccine rumours. She wrote: “For sure wasn't the vaccine that caused his death. My baby left in peace with his usually smile and now is not the time to talk nonsense.”

Earl Simmons died on 9 April 2021 at the age of 50. Known as DMX, Simmons was nominated for three Grammy awards, and was the first artist to see their first five albums debut at number one on the US Billboard chart.

Simmons was hospitalised after a heart attack and died several days later.

There is no evidence he received a Covid-19 vaccine at all, as many fact-checking organisations have pointed out. The claim that the jab led to his death was first made by a gossip site known for publishing false stories. The site provided no evidence for its claim, instead quoting an anonymous source unsupported by official statements.

There is no mention of Simmons being vaccinated in any of his family’s public statements. People who knew the rapper haven’t said anything about it either. None of the people close to DMX have said his heart attack was caused by a Covid-19 vaccine.

His manager debunked rumours about the rapper’s health while DMX was alive and on life support in hospital. Simmons’s lawyer said that claims about the cause of the heart attack could not be confirmed. Neither mentioned a Covid-19 vaccine.

Aaron and Hagler both got the Covid-19 jab, but died nearly three weeks later. The side effects associated with Covid-19 vaccines typically appear and then fade away long before then.

The US Centers for Disease Control says the most common side effects are “normal signs that your body is building protection” and “should go away in a few days”. The British National Health Service (NHS) says most side effects are “mild and should not last longer than a week”.

The NHS says even serious side effects, such as severe allergic reactions, usually occur within minutes. The UK’s Medicines and Healthcare Products Regulatory Agency says that because of this, people who get certain vaccines should be monitored for 15 minutes afterwards.

Some vaccination programmes that use the Johnson & Johnson vaccine have been paused after reports of blood clots appearing one to three weeks after vaccination. But it is unclear whether these clotting events are related to the vaccine. No other serious side effects of Covid-19 vaccines have been reported more than a few days after vaccination.

Covid-19 vaccines have been rigorously tested to ensure that they are safe and effective. See Africa Check’s factsheets on the vaccine approval process in South Africa, Nigeria and Kenya for more information.