“Kale juice can protect against type 2 diabetes, heart disease, and high blood pressure,” reads text on an image posted on Facebook. It claims that the leafy green vegetable is “not just loaded with antioxidants” but also a nutritional “superfood”.

What does this mean? And can a diet of nutritious kale really protect you from heart disease and other conditions? 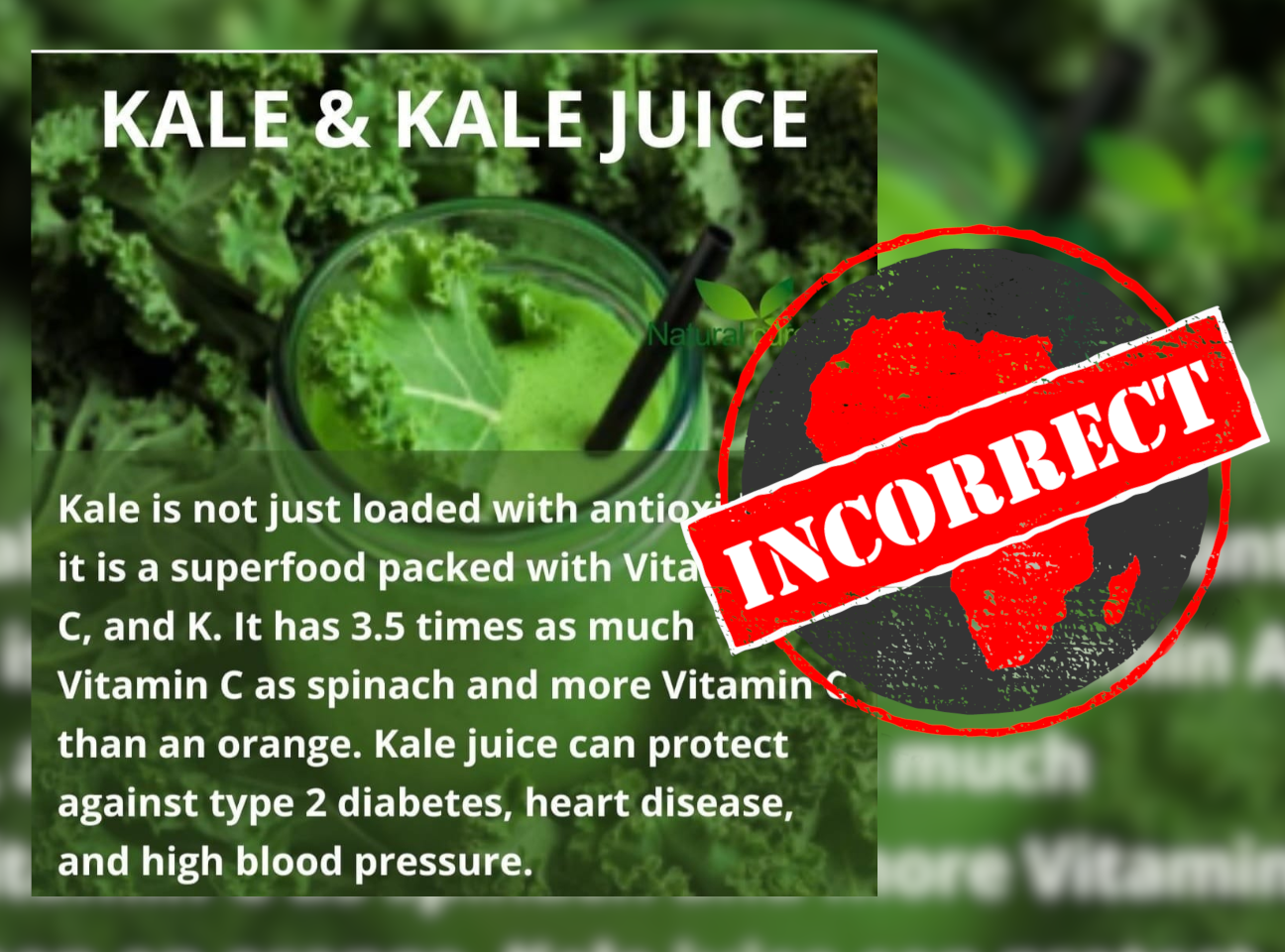 Other than saying kale is full of antioxidants, the graphic doesn’t explain why its juice protects against disease.

“Antioxidant” is a broad term applied to certain chemicals that slow, prevent or reverse a kind of biological damage known as “oxidative stress”.

Oxidative stress is caused by other chemicals, “free radicals”, which are vital to some bodily functions but can cause damage if they are not properly regulated by the body.

Antioxidants are important for maintaining a healthy diet, but as noted in our factsheet, research into the health benefits of nutritional antioxidants is inconclusive. For example, clinical trials to determine whether antioxidants can be used to prevent or treat cancer generally show no benefits. The same is true of heart disease and other cardiovascular conditions such as high blood pressure.

The United States’ Centers for Disease Control (CDC) does recommend a healthy diet to avoid high blood pressure, but this is just one recommendation, and it means doing more than just eating antioxidants.

The CDC also recommends eating “a variety of foods rich in potassium, fibre, and protein and lower in salt (sodium) and saturated fat”. And this should be done alongside lifestyle choices like not smoking, limiting alcohol intake, getting enough sleep and physical exercise.

In type 2 diabetes, the body is less able to produce or respond to the hormone insulin, which helps maintain healthy blood sugar levels.

The US-based Mayo Clinic says there is no cure for type 2 diabetes. While it is recommended that people with diabetes eat a healthy and balanced diet (including antioxidants and other nutrients), this can’t prevent the disease. It is only one of a number of lifestyle choices that help diabetics manage the disease.

So what about claims that kale is a “superfood”? Is this unrelated to its antioxidant properties?

‘Superfood’ a vague term, and no guarantee against disease

The image in the post reads: “Kale is not just loaded with antioxidants, it is a superfood packed with Vitamin A, C, and K.” And it is true that kale contains all of these vitamins, along with several other nutrients. This does make it a nutrient-rich and useful addition to a balanced diet.

But this still doesn’t guarantee protection against any of the diseases listed. While the post implies otherwise, vitamin A and C are antioxidants. Like other nutrients, they are recommended as part of a healthy diet, but can’t prevent disease and may actually be harmful when taken in large amounts.

The term “superfood” is also misleading. The European Food Information Council (Eufic) has said that many “superfoods” are labelled this way after lab research finds that “the nutrients in these foods have been shown to have several health-promoting properties”.

But Eufic warns that “the conditions under which foods are studied in the lab are often very different to the way these foods are normally consumed by people”. It notes that much of this research is into the effects of these nutrients at levels too high to realistically achieve in a normal diet.

Eufic recommends eating a variety of fruits and vegetables, whether or not they are considered to be superfoods, and warns that “it is unrealistic to expect a narrow range of ‘superfoods’ to significantly improve our well-being”.

As we write, any claim that a particular food or nutrient can totally protect against a disease should raise a red flag. If you are worried that your diet lacks enough of a particular nutrient, or that you are at risk of a particular disease, seek advice from your doctor before making radical changes to your diet.

Bayers said Zam-Buk ointment was for external use only. They did not recommend using it for steaming.