At least, that’s according to a claim circulating on Facebook and blogs in March 2021. It even appears on an official-looking document doing the rounds on WhatsApp, which carries the seal of the US Department of Homeland Security (DHS) and is headed “US Citizenship and Immigration Services”.

“This news platform understands that the US president signed the order which states that interested citizen of the Federal Republic of Nigeria who measure in some special profession are eligible for American E-Work Visa, and Residence Permit,” one version reads.

“In a statement signed by the Director of United States Citizenship and Immigration Service on March 31, 2021, conveyed the order to the Nigerian Mission in the United States by the US Department of Immigration.”

The document says people who qualify must email [email protected] and pay US$250 for an English proficiency test and $150 for a Covid-19 test.

Since his inauguration on 20 January 2021, Biden has signed 45 executive orders. But this is not one of them. We checked. 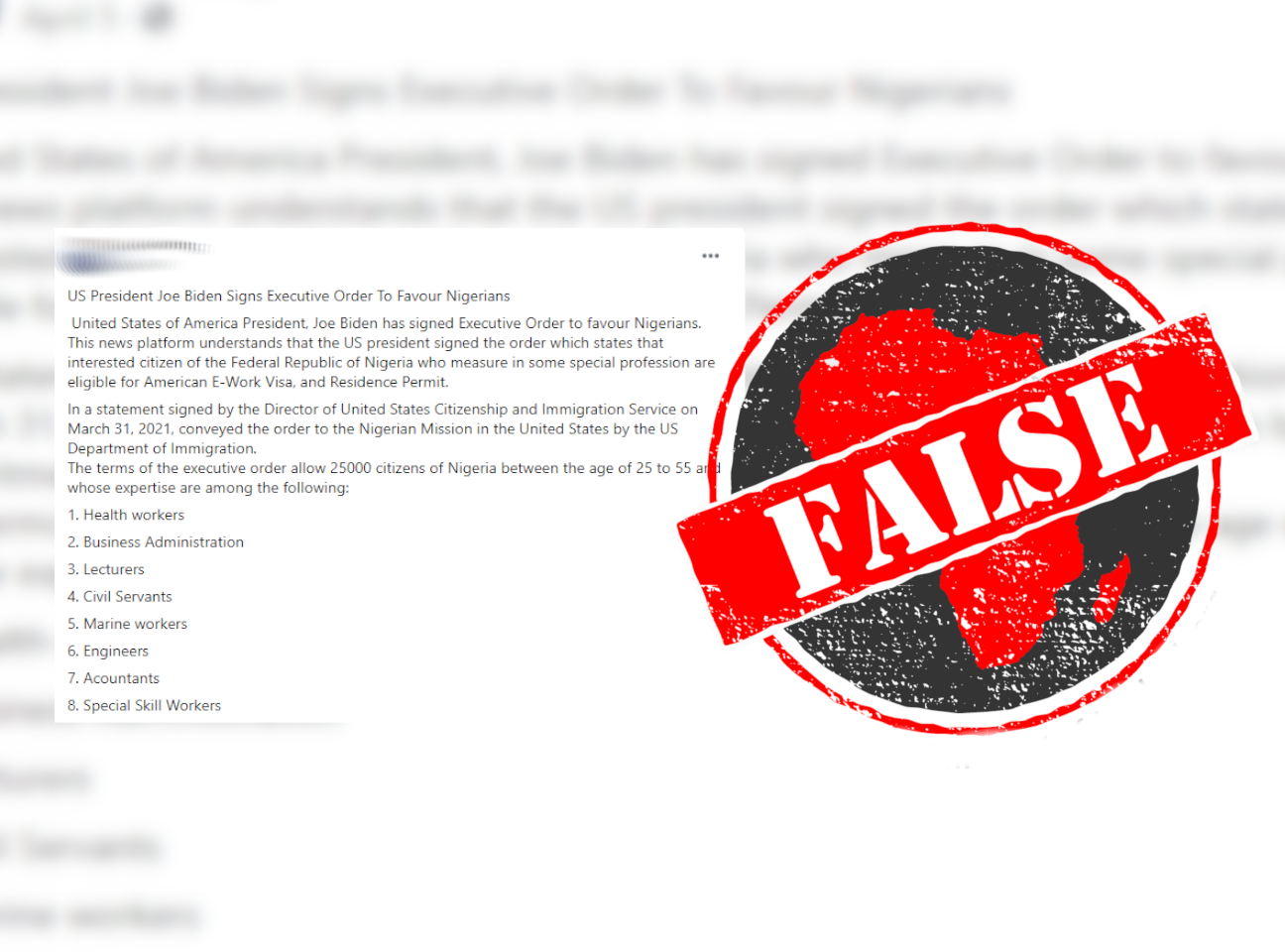 Signs of a fake document

Biden’s executive orders are listed in the Federal Register within the National Archives and Records, which stores all presidential records. The order is not on the list.

The document is poorly written, with visual errors. It puts the name of the US Citizenship and Immigration Services and the DHS seal in the wrong place – in the middle of the page instead of on the right, as seen in authentic USCIS documents. (The USCIS is a division of the Department of Homeland Security.)

The document is signed, but no name is given. The signature is simply attributed to “Director USCIS”. This differs from correspondence available on the USCIS website, which does carry a name beneath the signature.

And the email address [email protected] is fake.

“Visa information on official U.S. government websites ending in ‘.gov’ is official and correct,” says the US Department of State’s Bureau of Consular Affairs.

“Official US government email addresses also end in ‘.gov,’ and any visa-related correspondence coming from an address that does not end with ‘.gov’ should be considered suspect.”

Africa Check looked through the USCIS website and found no evidence that it conducts English proficiency exams, performs Covid-19 tests or charges a fee for these services. The process for granting employment-based immigration visas to the US involves interviews, case studies and several other steps.

On 25 April, the US Mission to Nigeria tweeted a warning that an almost identical version of the document – offering visas and work permits to Nigerians aged 45 to 55 – was a scam.

“Fraud Alert!” the tweet reads. “Scammers and fraudsters are circulating a fake ‘press release’ claiming to offer a new type of work visa to Nigerian citizens aged 40-55. It’s the same old scam, but in fresh packaging – don’t become a victim!”

If you have questions about whether visa information is legitimate, please refer only to official sources: https://t.co/UrlmAaIYJP, https://t.co/GD3pd7k0ZY, and https://t.co/K7rIrNsz6S. pic.twitter.com/fg8RT7yP5S

And on 9 April, the mission issued a statement on the claim.

“The US Mission to Nigeria is drawing the general public’s attention to a fake ‘press release’ claiming to offer a new type of work visa to Nigerians,” it reads. “Scammers and fraudsters circulate this phoney information that the new work visa applies to Nigerian citizens aged 40-55. ”

It adds: “If you have questions about whether visa information is legitimate, please refer only to official sources: travel.state.gov, ng.usembassy.gov/visas, and www.ustraveldocs.com/ng."