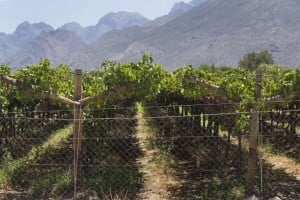 A vineyard of table grapes in De Doorns, a small farming town about 140 km North of Cape Town in January 2013. Photo: AFP/Rodger Bosch

“Black formula: 1913 you white stolen 87% of our land. Since 1994 only 8% was bought back,” Mngxitama wrote, arguing against an Africa Check report in which we found his recent claim that “35,000 white families and businesses own more than 80% of South Africa’s land” to be unsupported.

When Mngxitama first made the claim last year, he told Africa Check that it was based on research conducted by the Institute for Poverty, Land and Agrarian Studies (PLAAS) at the University of the Western-Cape, among others.

But a PLAAS factsheet, prepared by Cherryl Walker, professor of sociology at the University of Stellenbosch and author of Landmarked: Land Claims and Land Restitution in South Africa, with Alex Dubb, a PLAAS researcher, states that the “master plan” of the 1913 Land Act failed to fully realise.

“The 87:13 ratio of white to black ownership of land derives from an apartheid blueprint based on the Land Acts of 1913 and 1936 that had not been completely implemented by 1994,” wrote Walker and Dubb.

In Africa Check's previous report, we cited an audit of state land, carried out by the office of South Africa’s Chief Surveyor-General and published in 2013. It showed that 79% of South Africa’s landmass was private owned, but that it included agricultural land, mining properties and urban real estate, owned by both black and white South Africans, foreigners, companies and trusts.

We concluded the claim that whites own 80% of South African is incorrect and not supported by the available data - but "huge disparities remain and land ownership continues to be heavily skewed across racial lines two decades after the end of apartheid".