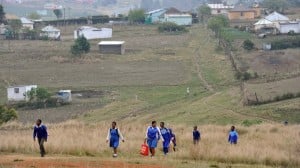 Pressure is mounting on South Africa's government to provide free sanitary products to women and girls from poor communities - a promise made by President Jacob Zuma in his 2011 State of the Nation address.

Members of parliament yesterday called on government to provide free sanitary towels and make them more affordable by removing value added tax from the products.

An online petition - addressed to South Africa's parliament, basic education minister, health minister and social development minister - emphasised the importance of supplying "essential sanitary products to young girls, particularly those from low income communities". It has been signed by over 3,000 people so far.

Five years ago President Jacob Zuma committed to "provide services related to… sanitary towels for the indigent” during his 2011 State of the Nation address.

However, investigations by community journalism website GroundUp in 2014 and 2015 found no evidence that such a programme had been established. Africa Check took up the investigation earlier this year.

The department of basic education said that through partnerships it had provided "material support to learners, including sanitary ware to girls in some instances” but they did not have any data on how many school girls had benefited. - 15/04/2016